Passion, Purpose, and Pastries: How Michelle Kaiser Found Meaning in Her Work 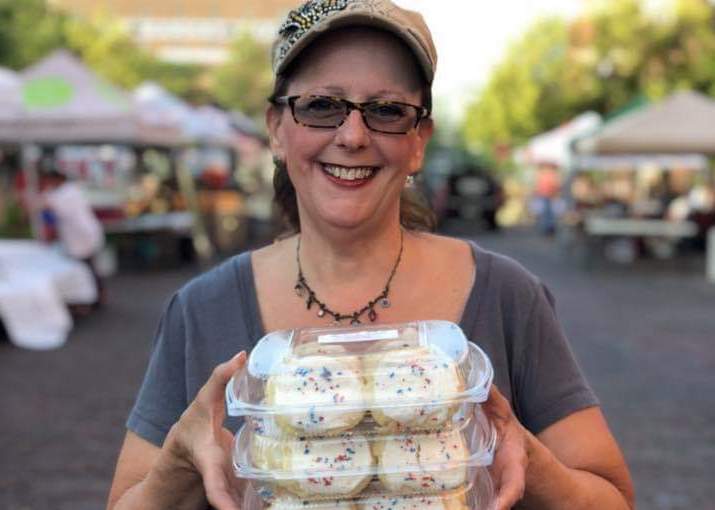 Michelle Kaiser is a passionate entrepreneur and baker who owns The Omaha Bakery here in (you guessed it) Omaha, Nebraska. I recently interviewed Michelle about her career journey. Read on to learn how this joyful woman has found meaning in her work.

This one’s a tear-jerker, folks!

Michelle has shiny auburn hair, a friendly smile, and an almost cartoonishly cute voice. When I met her in her bakery for this interview, we stopped to chat with regulars as we slowly made our way to a table in the back of the comfortable event space connected to the bakery. While we talked, her youngest daughter sat beside us, silently filling pages of her sketchbook with impeccable drawings of Spider-Woman Gwen.

I met Michelle two months earlier when she spoke at 1 Million Cups about her recent business transformation. After a full decade without paying herself an income, her business is now booming as she focuses on keto baked goods. (Some customers drive three hours from Kansas City for her unmatched ability to create delicious pastries with such limited, healthful ingredients.) But why keto?

The decision that saved her life

A little over a year ago, Michelle was *very* sick.

She had developed multiple autoimmune disorders, one of her many medications had started giving her seizures, and she was in so much pain that she couldn’t even stand up. Specialists said “There’s nothing we can do” and even “You’re not sick.”

Her resulting depression was so severe, she had plans to commit suicide.

That’s when a friend suggested she look into a ketogenic diet. One final thing to try, she thought. Almost immediately, her ailments started to disappear. Now 95 pounds lighter and much happier than she was last July, not only can she stand without pain—she can bike over a mile!

Fascinated by her transformation and vulnerability, I wanted to learn more about Michelle’s life and career journey. How did she get interested in entrepreneurship and baking in the first place? What kept her going all those years without a paycheck? And as someone who seems to love what she does so completely, how has she found meaning in baking treats, something that seems so… extraneous?

The mindset that took her to culinary school

Michelle grew up in smalltown Nebraska where she developed a strong conviction.

“As a woman,” she explains, “I was always told what I can’t do. And I thought, I’m gonna prove you all wrong!”

After realizing college wasn’t for her (OK, maybe that one time they weren’t wrong), she decided she wanted to go to New York. She admits to having some major naivety behind this desire. Being on the coast, she assumed it would be sunny every day, and she’d spend all her free time at the beach!

Her family urged her to stay. “You can’t do that. That’s too far away!” But this only pushed her more.

Michelle went to New York as planned and became a nanny. (The sunshine didn’t quite pan out as expected.) As a nanny, she enjoyed cooking and baking. But, she explains, “I didn’t want to be somebody’s servant. So I decided, I’m going to be a chef!”

Having made her decision, she waltzed into more than half a dozen restaurants asking for a job before learning that as a woman, she’d need to go to culinary school to make it into those kitchens.

In culinary school, the first 6 months of classroom training were followed by 6 months of unpaid internship. Michelle joined a French bakery that frequently employed interns. The owner loved getting the free labor and never hired interns full-time, instead keeping a steady stream of unpaid workers coming in the door.

The talented French pastry chef, on the other hand, hated having to invest his time into training someone only for them to leave. During the day, he was a much scarier Gordon Ramsey. When he had nothing to say, he’d say nothing. Otherwise, he’d scream and throw things across the kitchen. Michelle says, “For six weeks, he made me cry every single day.”

He replied, “Just do it,” and hit her over the head with a cast iron skillet.

Not aware of how easy it would be to get a different internship, Michelle did what she knew how to do: she stuck with it.

“Giving up is never an option,” she tells me.

Plus, at night, the Frenchman would turn into a different person. If she did exactly what he told her to do, he might stay an extra hour or two and teach her how to make things her classmates didn’t have the opportunity to learn: truffles and nougatine and beautiful, flat marzipan… (She was so excited at this point in her story that I found myself wanting to be in that New York kitchen making complex French delicacies!)

She hated him, and she respected him.

After her internship, Michelle became one of the only interns to ever be offered full-time employment in that bakery. The Frenchman promoted her to Assistant Chef, and they worked together for 2 years.

Searching for meaning in tough times

Since those early days with the French chef, Michelle has held many jobs, married, had three children, and made her way back to Nebraska.

Sometimes, money was painfully tight. Michelle recalls her family’s financial low, during the years her bakery was called Alotta Brownies and located in Fremont, Nebraska. She had to routinely figure out how to cover utilities and feed their family of five on less than $50 a week.

Feeling hopeless at this time, Michelle took to prayer. She didn’t expect her prayers to be answered, but she said them anyway. If you haven’t noticed, she’s not much of a quitter.

“I just start praying. I prayed every single day: on the way to work, on the way home from work, at night when I couldn’t sleep and was crying. ‘God,’ I said, ‘tell me what you want from me. Because I know I’m making a difference. I know I’m doing something right. But is that enough? Is my husband going to stay with me? Are my kids going to appreciate this someday? Or are they going to resent me?’ And one night in the middle of the night, I couldn’t sleep. I heard God say, plain as day, ‘Tell your story.’”

She was surprised but certain. And she didn’t understand.

Several weeks later, on a Tuesday morning, a woman walked into Michelle’s bakery.

It really was. They don’t normally have peanut butter rolls on Tuesdays. Rolls don’t sell well. So, they only make 6 at a time, and only on the weekend. However, that morning, they happened to have a special order for 12 peanut butter rolls. Michelle was annoyed, in fact, when she walked into the kitchen earlier that morning and found that her staff had taken 14 rolls out of the freezer. She knew she wouldn’t be able to sell them, and money was too tight to waste two rolls!

As Michelle made conversation, she learned that the woman had driven over from Council Bluffs.

“You drove 45 minutes each way for a couple of peanut butter rolls?” Michelle replied with a smile. “What’s up with that?”

The woman took a breath and began. “Well, on Saturday night, I was with my best friend. She’s dying of cancer. I asked her, ‘If you could have one food in the world, what would it be?’ And she said, ‘I want a peanut butter cinnamon roll from Alotta Brownies Bakery in Fremont.’ You were closed on Sunday and Monday, so I’ve been waiting to come get these peanut butter rolls and take them back and share with her. It’s probably going to be the last meal she has.”

For Michelle, this was a clear sign from God. She had been given a purpose. Signs continued to appear for months, and together, the direction she was looking for began to take shape. She had her answer.

“My purpose,” Michelle says, “is to inspire others through food and emotion, and comfort and love and happiness.”

Like yours and mine, Michelle’s story has many chapters left to be written. She’s working on opening an online keto shop and a keto cafe!  You can follow the bakery on Facebook to stay in the loop.

And if you’re in town, stop in for a fresh coffee, heartwarming pastry, and friendly conversation! (The vegan raspberry coconut scone I ate was—not kidding—the most delicious scone I’ve ever eaten.)

There’s something so powerful and connecting about hearing other people’s stories.

If you enjoyed this article, sign up for my weekly Play Dates. I’ll personally deliver my next warm-fuzzy story straight to your inbox!